Here’s some US military boot history…

Before the “Two buckle boot” came into service later in the war, foot soldiers and others in the US Army during WWII wore the “Service Shoe” covered by a set of leggings. The Service Shoe, more of a low boot than a shoe, went through various evolutions to increase wear length, to reduce the amount of raw materials used and reduce production time.

This image shows the outward appearance differences between the Type II and Type III styles. There were various specifications within each Type:

I’ve illustrated various differences between the types and specifications in the examples I’ve adapted from ww2uniforms.com below. The first image shows a version of the Type II Service Shoe while the second shows the Type III and it’s rough out design. 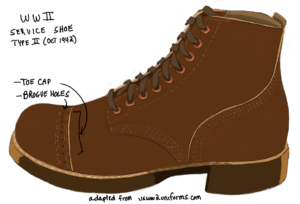 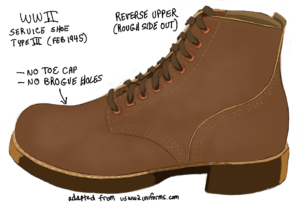 The Shoe was replaced for overseas troops with the “Double Buckle Boot.”